Hip Hop is the newest addition and fastest-growing program at Hyde Park School of Dance. With world-class professional instruction in a positive environment and the freedom of self-expression through dancing to high-energy music, it's no wonder our kids love it!

Hip hop dance was born on the street, and the styles that originated in this way vary greatly by their geographic origin. HPSD instructor Jonathan St. Clair specializes in two of these styles: breaking and popping. Each has its own distinctive flavor, and its own set of fundamentals from which dancers improvise when performing or battling.

Hip hop has evolved a lot since its origins. One of the most notable changes its undergone is the adaptation of street styles for the studio. Professional dancers inspired by the improvised moves born on the street adapted this kind of dancing to suit their own purposes, blending it with jazz dace so that they could use hip hop style in choreographed works. This kind of in-studio, choreographed hip hop is sometimes called "new style" or "jazz-funk," and it's the kind of hip hop dance you see in music videos, dance clubs, dance team choreography, and many dance films. HPSD instructor Amber Echols is an experienced educator and award-winning choreographer in this type of dance. We call this type of dance studio hip hop, and are proud to offer it in addition to breaking and popping.
BreakingB-boys and b-girls in the making should will love our improvisational breaking classes. Breaking was the first style of hip hop dance to emerge in the Bronx in the late 60s and early 70s, and it consists of four principle move types: toprocks are footwork-focused standing steps; downrocks are footwork moves performed with both hands and feet on the floor; freezes are just what they sound like - frozen poses a dancer typically holds on his or her hands with feet in the air; and power moves, which are the trickiest and most acrobatic type of move. Drops help a b-boy or b-girl transition between toprock and downrock, and freezes and power moves are peppered throughout. Breaking can be performed as a battle between two crews, or a one-on-one in the center of a circle, called a cypher.

PoppingAs breaking was emerging on the streets of New York, popping began to take hold in California. Dancers who created this style of dance combined fluid motions with more jerky movements performed by quickly contracting and relaxing their muscles to move or "pop" their bodies into various positions. Originally, popping was performed primarily to funk music. It was eventually co-opted by the hip hop movement that was beginning to pick up steam in the early eighties, and now it is often performed to hip hop music. If you've ever seen a dancer perform a really tight robot, you've seen something related to popping, but as any popper knows, there's a lot more to it than meets the eye!

Studio
Studio hip hop is an upbeat, high-energy style featuring rhythmic combinations with a focus on body isolations and a contrast between smooth and sharp movements. This style incorporates the latest hip hop dance moves, and gets the whole group working together to present a choreographed routine. 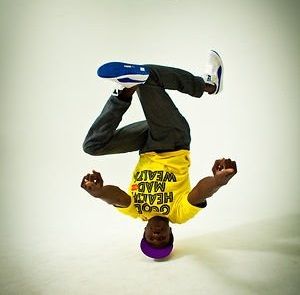 Explore Our Other Dance Types:

Confused about the difference between popping and breaking?